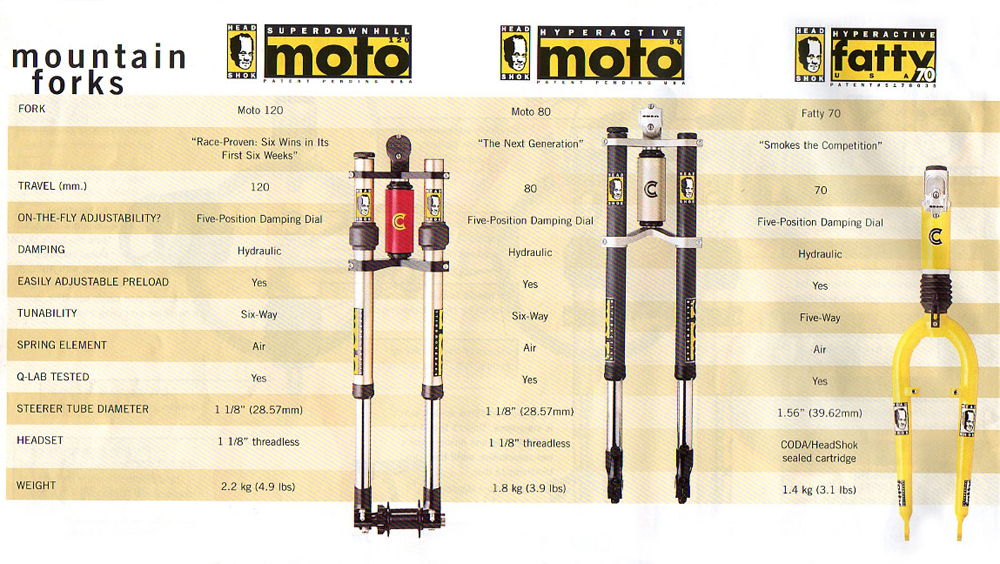 Team riders at the time included;

Here’s how it started;

(May 3, 1996) Cannondale, the Connecticut-based manufacturer of lightweight,
high-performance aluminum bicycles, is forming a separate division for its
HeadShok line of mountain bike suspension forks.  The company’s new HeadShok
division is busy on two fronts: developing new forks with increased
travel in the traditional HeadShok/telescoping-steerer tube style for use on
its own models, and developing at least two telescoping-blade HeadShok forks
for bikes with standard diameter head tubes.  The two telescoping-blade forks
will be the first HeadShok forks compatible with bikes other than Cannondales.

According to Scott Montgomery, Cannondale’s Vice President of Listening, the
move will help the company to continue its overall focus on innovation.  “Our
goal has always been to produce the finest bicycles in the world.  But
improving the frame alone can only take you so far; Eventually, you ha
ve to improve the fork and other components as well,² explained Montgomery.

“Toward that end, we now have three different bike-related divisions within
Cannondale — our frame division, CODA components division, and the HeadShok
fork division.  Each division is focused on its own particular area of
expertise, but also works with the other groups to form proprietary, int
egrated technologies that, as a frame-maker alone, we couldn’t otherwise
develop.  We call the approach Systems Integration.²  Montgomery added that
each division has its own budgets, product manager and research and development
staff, mirroring the approach that Cannondale has taken with its ap
parel and cycling accessories business.

Montgomery went on to explain that the two new HeadShok forks for standard
diameter head tubes are scheduled for introduction later this year, and will
incorporate the triple-clamp design developed for the Volvo/Cannondale Mountain
Bike Racing Team.  “The new forks, the Moto 120 and Moto 80, are
based on the Moto fork used by the Team downhillers,² said Montgomery.  “Both
forks have the adjustable triple-clamp design that lets you dial-in the bike’s
head angle by raising or lowering the position of the clamps on the fork legs.
And because the triple-clamp approach allows the fork legs
to overlap the head tube — and dramatically increase the distance between the
bushings inside the stanchion tubes — stiction is reduced.²  Montgomery also
noted that Cannondale has already had inquiries from other bike makers
interested in spec’ing Moto forks on their frames.

The Moto 120 is currently spec’d on Cannondale’s award-winning Super V DH
Active.  It features an air spring, 120 millimeters of travel, and individually
adjustable compression and rebound damping.  It is paired with a dedicated,
oversized hub for increased stiffness and true tracking precision.
The Moto 80 is suitable for both downhill and cross-country riding, and has
80 millimeters of travel, an adjustable MCU spring, and oil-damping.  Like the
Moto 120, the Moto 80 system uses a dedicated, oversized custom hub (with a
unique quick-release system) to deliver precise tracking.  Mont
gomery said the Moto 120 will be in bike shops in July, and the Moto 80 will be
available in November.  Prices on the new forks have not yet been determined.

If I can find any tech docs from yester-year I’ll be able to tell you more.