issue 108 – october 2007
Mitch Yeates on the cover of the road trip issue. Photo by Steve Bancroft.
Dirt box. Steve Bancroft: This issue is dedicated to paying homage to the magical experience that is the ‘BMX Roadtrip’. The places you go, the people you meet, the places you ride, the places you sleep: the only certainty are memories that will last a lifetime. You know you’re having a good time when you reach that certain mindset, that near nihilistic mentality; a level of consciousness only a roadtrip can transcend you to. Sleep deprivation, inconsistent diet, consistent hangover, lack of female contact, exhaustion and a general deficiency of personal hygiene all add up to create a surreal sense of self. Within the space of a few days usual social conduct breaks down and it becomes completely normal to sleep on tarmac, be naked in public and cook food on stolen shopping baskets. The comforting factor is having a goal… a destination. This feeling of purpose mixes with the excitement of the unknown to create a sensation that doesn’t translate easily to words. Thousands of people have tried, with mixed success, but it’s just not meant to be. Way back in the 50s Jack Kerouac wrote On The Road, arguably the best travel storey ever written, but even this piece of literary genius falls short of accurately describing the unadulterated sense freedom offered by travelling with good friends and small bikes. Although we’ve tried with this issue, you can’t really read about why roadtrips are so special; we can harp on until we’re blue in the face about all the crazy occurrences and the endless good times, but until you’ve experienced it first hand you’ll still be in the dark. Read this issue and plan a trip – whether it’s a day trip to a skatepark in the next town over or year long voyage of discovery: there’s a whole world waiting out there, and it’s not going to come to you.
The great Ride meeting of 2007: Northern John, Rhys McFleece, Daniel Benson, Kohn Dye, H-man, Robin Fenlon, Steve Bancroft, Mark Noble, Tim March, Rob Dolecki and Chris Noble.
Neighbourhood watch.
Top fives: Ron Wilkerson.
Lucky sevens: Daniel Benson.
Video player: Marco Massei.
Flat matters: Best of the Green Mile jam.
Industry: Rob Dolecki.
Six minutes with Marcos Torres.
New stuff: Standard Bykes, Fly, Simple, Ilegal, DK, 43 bolts, Coalition, FBM, Thomson, Chris King, Halo.
Framework: United Trinity, S&M Black Bike, DK R/T, Ilegal, United Feather.
Bike review: We The People Trust and Macneil’s Bibi frame.
The illustrated A to Z of the BMX Road Trip.
The Superstar UK roadtrip.
Props Road Fools Rock&Roll Tour 2.
Federal Germany: A trip to remember.
4Down in Europe.
The Hotwheels roadtrip part 1.
Budget 3000 Movment trip.
The Colony BMX trip of New Zealand.
Simple Bikes Copenhagen to Roskilde.
Pro bike check: Jon Robinson’s United Squad and Marv’s Fit Edwin.
Textbook: Roadtrip.
20 questions: Liam Eltham and Ratboy.
WTF? Arrash Saidi.
Icon: Props Road Fools 1. 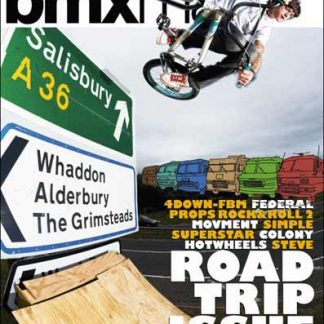