issue 123 – january 2009 (1)
rideukbmx.com, december 2008: Tom Blyth is our cover model, taken on a recent trip to Malaga with the FBM team.
Bart de Jong, www.fatbmx.com, december 2008: It feels like the last three issues of RIDE UK arrived within a 5 week span. Rutger Pauw’s covershot was amazing and then it was Kye Forte’s cover for # 122 and before we could review them we received issue 123, the January 2009 issue. Magazine covers do get released by the publishers so early that I’m not sure it does make sense to review a magazine after they’ve shown the content (list) online a few weeks ago. It kind of feels like they want to show they’ve got the job done a.s.a.p. but it takes a few weeks before the mag arrives at the subscribers’. Now that Paul’s Boutique has stopped carrying magazines (they used to receive the mags a bit earlier), I’ll have to rely on my copy to get in the mail before I can review it. Anyway, as you understand I haven’t read the whole mag yet but if we would wait until that happens, we’re even a few days further down the calendar before posting a review. Here’s what’s inside # 123:
Regulars:
-Dirtbox
-UK News
-USA News
-Marv’s Disposable Life
-Tom Blyth’s Agonising Top Fives
-Video Player: Newrick Vs Cox
-Video Box
-Industry: Federal
-Frameworks
-Hardware
-Bike Test: Complete with colour-coordinated test pilot, RIDE takes a Stolen Sinner V2 through its paces
-Ever wanted to design your own pair of NIKE kicks?
-Informer: Shaun Hadlington (not Shaun Egglington or Jay Eggleston)
-Informer: Bruza
-Weekender: Zeal Distribution’s first B-day jam
-Pro Bike: Leo Forte
-Pro Bike: Matt Roe
-Parkwarden: Cleethorpes
-20 questions: Gary Young
-How-To: Cement. Knock up muck youth!
-WTF: Dre
-WTF: Stan
-Letters
-Head to head: Burns Vs Castle
-Final Frame
And that’s only half of it.
Features:
52: Bunny Warehouse
56: FBM’s Ghetto Big Air Challenge
66: A to Z on filming
76: SLC
88: Megatour 8 with TCU
98: China
112: DSAB KNOB tour
118: The Chapmans
Worth $ 7.50? Definitely 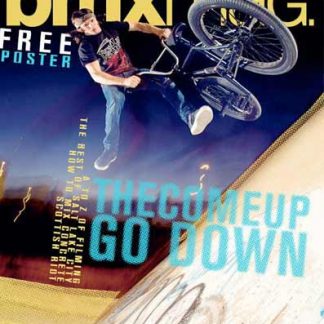