issue 138 – april 2010
United Bike Co/DC Shoes/Fox rider, Leo Forte and photographer, Jonathan Williams snuck themselves and a kicker into the UK’s largest supermarket, Tescos. After flying around on the glassy smooth floor, Leo boosts over the bargains, which scores him this months front cover.
rideukbmx.com, march 2010: Issue 138 hits the shelves on Thursday and hopefully it’ll close the door on what’s been the most grotty and anti-BMX winter in living memory (well, the coldest on record for the last 40-odd years… so sorry dads or DMC or Tim March or any other silver fox riders out there… you may well remember a less BMX friendly one). Never before have the seasons influenced the content of the magazine to the extent they have this issue, Mother Nature herself was behind the wheel last month and she sent people scurrying in all directions, looking for shelter or sunny skies.
Wild in the Aisles: Leo’s random lock-in. As you’ve probably already seen, Leo Forte sought refuge inside Tescos and he’s written a particularly random story to accompany this particularly random riding session.
Access All Areas: Simpel Session 2010. The world’s premier contest riders (and their entourage of rowdy hangers-on — mostly drunken Brits Abroad by the looks of things) battled it out under the roof of the Saku Sur Hall in Tallinn, Estonia for the 10th anniversary of the legendary Simpel Session. We went deep behind the scenes to find out if it really is all hammer tricks, free drinks, cute screaming girls and hotel orgies (…and in case you can’t wait to find out if it is or not… it is!).
Treasure Island: Spot Hunting in Tenerife. A gallant cast of adventures set sailed south and washed up on a small island off the coast of Africa for a week in search of that ever elusive ‘Spot Gold’. Headed up by Niki Croft, Robbo and The Count, the motley crew befriended the natives and found more than enough sun-kissed treasure to see them through till Spring.
Run To The Hills: VClub’s Arizonian Adventure. Even the usually agreeable climate of VClub’s hometown, Austin, Texas took a dive below freezing and forced the team into the barren deserts (and endless ditches) of Arizona… all For The Sake Of The Video.
Nike 6.0Z: Harry Main In Australia. But, the winner of this month’s Run To The Sun was our own Harry Main. He’s renowned for pushing things one step further and generally being on a different level to everyone else, so it makes sense that he should head to another hemisphere to stamp his distinct style on some fresh Australian concrete.
A F*cking Winter Wonder Land: Props’ Midwest Tour. Fellow BMX media outfit, Props Video Magazine were also wrestling the elements this month in a bid to keep putting out issues – we teamed up and took a tour of the MId-West’s hottest indoor facilities (someone needs to build a UK version of Ray’s Bike Park… badly… that place is too wild).
Interview: Buzzo. And then there’s Buzzo, the up-and-coming Bristolian who looks like a Spanish foreign exchange kid from the mid 90’s… he didn’t go anywhere… he kind of got left behind. 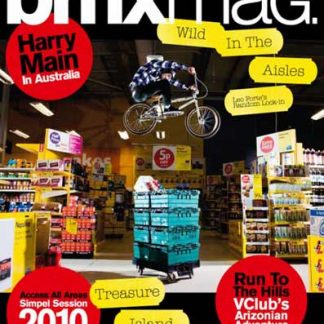