issue 141 – july 2010
Jimmy Rushmore on the cover.
rideukbmx.com, june 2010: Check out issue 141 featuring a Jimmy Rushmore table out one of the oldest and hardest transitions in the UK! This months regulars are occupied by; Luke Peeters, Scott The Punk, Garrett Reeves, Scott Ditchburn, Mike Miller and more. This months ‘How To’ is with The Make’s, Chicken teaching you how to leap frog. Check out the featured articles below. Now go buy it! It’s got a poster and info on how to win a Complete Fit Bike Co Bike and 2x VIP tickets to Relentless NASS.
The Changing Man: Adam ‘Wozzy’ Wasylenko Interview. “…I came up with a name for my own ‘crossover thrash’ band called Birthquake, you’d drop a ten stair if you heard them play!…”
Live Fast, Die Faster: Justin Simpson Interview. “…It’s loud, and it’s fast, and it’s tough as fuck – and that’s how we roll …”
Lost and Found: Union Search For Concrete Waves. “…Girls like this really annoy me, you can’t even ride and the only reason you’re watching is because you’ve got the hots for Rushmore. Does she know that a lot of the transitions are unpredictable?…”
Rolling Through Rural Virginia: FBM In Small Town America. “…The one bomb we did was a 5-mile run, and it only took about 7 minutes to do… that means our average speed was really fast …”
Hello Fairies: An Isle Of Man HDP Scene Report. “…8 foreigners dabble with death as they explore the mystical island of man…”
The Yorkshire Secret: Safe Nath interview. “…Frank Bruno’s got a better chance of leading the BNP than you have of contacting Nath…”
Je Suis Un Poisson Rouge: Amity In France. “…I wanted a baguette, but I saw the word ‘croissant’ and just wanted to say the word ‘croissant’, so when the lady asked me what I wanted, I just said ‘croissant’…”
Weekender: FISE 2010 – Montpellier, France. 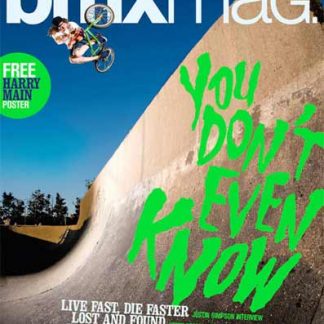