*includes FREE STICKERS as advertised on the cover.

issue 146 – december 2010
Steve Bancroft on the cover.
rideukbmx.com, november 2010: So what’s in the issue ? First off, you do get a bunch of FREE stickers. And inside, we have Top 5’s occupied by Corey Martinez, industry news with Almond Footwear, a lot of product reviews and loads more other cool stuff! Also you could learn how to Downside Smith better than Luke Towey! Check out the featured articles below, and be sure to head out and go buy one!
Sin City: Interbike 2010 “…Thankfully I don’t think the UK scene takes itself seriously enough yet to need a glamorous awards night, and I hope that’s the way it stays…”
Road To Recovery: Mike Aitken Interview “…The plan for the future is I’m gonna go down there and do that trick that I got hurt on over that jump again. Not lettin’ it take me out like that…”
Walking A Fine Line: Shadow Conspiracy Roadtrip “…JP, I want to visit America and walk a fine line between life and death. A simple request from Scott Ditchburn…”
Growing Up In Public: Leo Forte Interview “…If by “pagan” you’re referring to the Latin origin “paganus” which suggests rural, rustic or of the country then there’s strong evidence. As for witchcraft. . . there’s just not enough hours in the day…”
Hotter Than Two Squirrels Fucking In A Wool Sock: Sunday Roadtrip “…We rode all day every day while there, got some stuff done, and managed to have fun at night pulling 40 yr old titties out of shirts…”
Empire Of The Sun: Empire In Spain “…Apparently returning would be a bad idea, but Hanson and I are never ones to shy away from bad ideas…”
Complete Nightmare: 12 Complete Bikes Go Head To Head “…If you had to compare the brand to a car I reckon a Golf would be a good match…”
Cheers Sharon And Tracy: Red Bull Backyard Digger “…7Up single handedly ruined any possibility of me ever liking lemonade. I wouldn’t even use it as a mixer…”

Bart de Jong, www.fatbmx.com: For a second I thought I was looking at R.A.D. (Read And Destroy) magazine. The Full Circle colours reminded me of the mag that used to cover the UK scene. But this is the new cover of RIDE UK, #146!
It will have the following to keep you occupied during the rainy days:
-Road to Recovery: Mike Aitken interview
-Growing up in Public: Leo Forte interview
-Sin City: Viva Las Vegas
-Cheers Sharon and Tracy: Red Bull Backyard Digger
-Complete Nightmare: 12 completes go head to head
-Walking a Fine Line: Shadow Conspiracy road trip
-Hotter than two squirrels fucking in a wool sock: Sunday Road trip 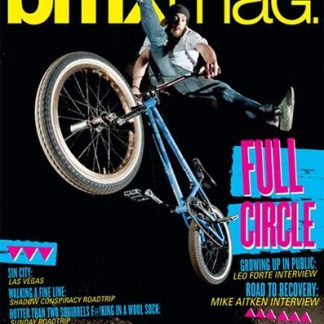