rideukbmx.mpora.com, december 2011: In this issue:
Mad Jon Taylor tells us what he Loves & Hates
Bruza gives us a Bunch of Fives
An Insight into how we shot this month’s cover
Reviews of new Source and FBM DVDs
Loads of info on some new fresh products
Arron Ross get’s his complete Sunday bike Tried & Tested!
VANS Let it Ride custom Guitar and more up ‘For the Win
Rich Lee-Haigh takes’s it to the next level in his Step Up
A brief look at what went down at the Berlin Telekom Playgrounds
A Catch Up with Brian Yeagle an what he has been up to since his injury
Ale Pitu, Alex Boyd and Stuart London get a First Look
Jambul fills in our Whats?
Pro Bike checks from Chris Doyle and Paul Ryan.
We take you to Terminal 1 skatepark in this month’s spot check.
A Game of Two Halves: VANS Let it Ride 2011. We follow one of the two ‘VANS Let it Ride’ teams to the sunny Canary Islands. Featuring Gary Young, Ben Hennon, Dakota Roche, Eddie Zunda, Bas Keep and Tobias Wicke catching the sun and more…
Bad Idea: The making of the EMPIRE DVD. 4 years in the making! Was “Bad idea” really a bad idea? Find out in this in depth feature straight out of Austin, TX about the making of EMPIRE’s latest DVD.
Dos Amigos En Malaga: Don’t call it a team trip. Ben Hennon and Dan Lacey head to Malaga for their first Chain Reaction trip away. “We explored new spots and enjoyed some classics, all at a leisurely pace. Malaga can do that to you, it just that vibe about it…”
Do what you like and you will like what you did. The Stefan Lantschner Interview. Stefan Lantschner is not slowing down. He’s going faster and higher as each day goes on, while still making it look good! Check him out in his full Interview… “…I always think that if you can do stuff in your head you can do it on your bike…”
Monkey Nuts and Cee-Lo: Macneil UK in Madrid. Not so long ago Macneil announced their new UK team. We follow them to Madrid on their first trip together!
Say What?! James ‘Jambul’ Giles answers a few questions for us.
See what Chris Doyle is currently riding… Chris Doyle is known for a high seat post, but don’t let that fool you as he has one of cleanest bikes around. 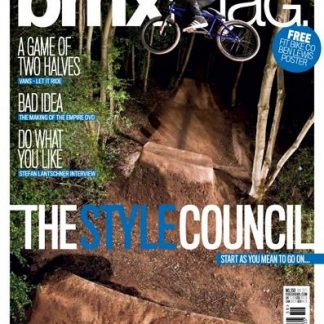