*includes FREE Stickers as advertised on the cover.

Sam Marden boosts a tobogan out of this rail for the cover of issue 187 shot by Joe Bailey. Here’s what’s inside…

The Bone Deth crew head out to Mexico to attack rooftops and rails in their own unique way. Sean Burns puts the story together while Walter Pieringer captures the images. This is another must read from the pen of Sean Burns, it’s a laugh a minute.

Big Airs in South Wales – Getting to know Dean Cueson

Robin Pearson travels to the depths of South Wales to take in some of the best transitions in the country with Dean Cueson. It’s all about getting to know Dean, both on and off the bike.

Dunc took a crew of trespassers behind enemy lines to ride some amazing spots that you’re really not allowed to. The likes of Isaac Lesser, Martyn Tambling and MJ took on the razor wire to bring you an inspiring piece about adventure.

Joe Bailey and Niki Croft meet up with Ben Basford for a long overdue interview. Ben is pure BMX. He can ride anything and has been a fixture in the UK scene for a good few years now.

The BSD crew head out on a crazy trip on the Pacific North West. Devin Feil and Tony Malouf are on hand to capture everything that went down, and we mean everything! 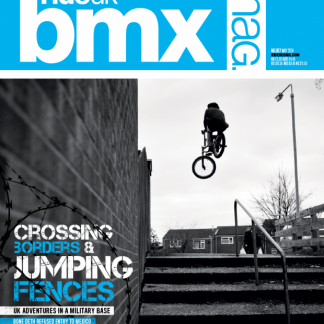