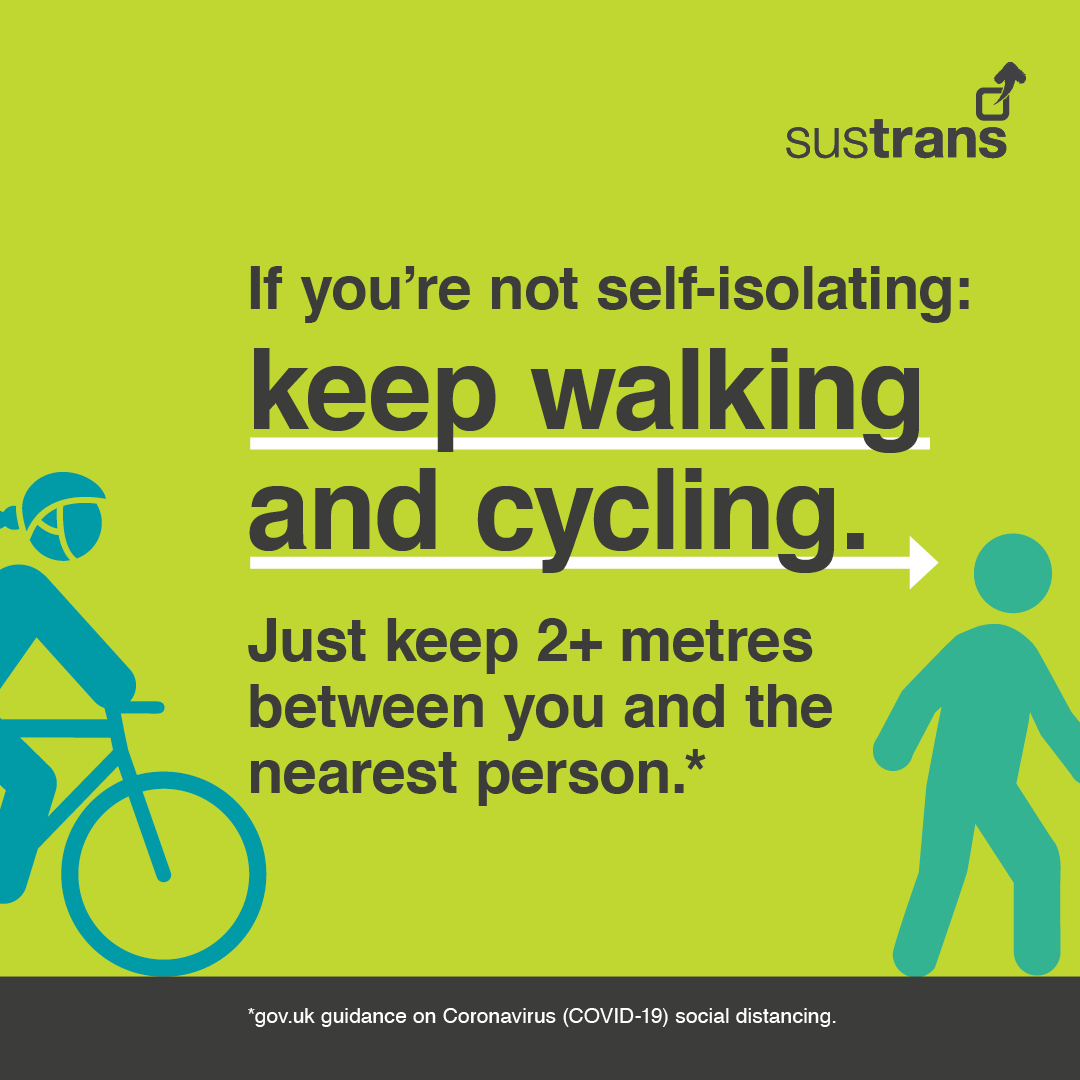 If you’re thinking of getting a bike for any reason, now is a great time to accelerate that decision and reap some healthy & financial rewards as the weather improves or local transport closes down …

In 2015, dementia overtook heart disease and stroke as the UK’s biggest cause of death. This graph shows the percentage of all UK deaths from the top four leading causes in 2017. These were dementia, heart disease, stroke and lung cancer.

It won’t be much surprise to you that compared to other ailments and things that might kill you, we’ve faced worse, and there are still bigger issues to consider going forward through this crisis, as a nation are we fit enough to survive, I’m not intending on spending it all sat down that’s for sure.

Heart disease still caused double the deaths from lung cancer (the second biggest killer) in 2015 and 18 times the number of deaths caused by road traffic accidents.

Whilst Self Isolation may be vital for the coming weeks, it’s not for everybody, and won’t be forever, but in the short term it will prove successful if people take the time to consider their actions wisely. If your plan is to eat yourself into a food coma with netflix for a companion for 14 days it’s not going to make you any less mortal than surviving a game of cluedo, however if you get your heart racing against a competitor in a game it’s actually proven to help boost your bodies systems and prove to be a great distraction from time for a while at least,but too much of a good thing can also be bad; so don’t forget to get up and stretch, eat sleep etc… Try a little socialising with those folks called your family, even if it is just a video or phone call.

CYCLING: The Tour de Yorkshire, scheduled to take place between 30 April and 3 May, is postponed with no new date yet announced.

Feeling a little lonely I posted this the other day encouraging people not to forget about the power of hugging, and we’re not all in the at risk groups but to some of us this isn’t appropriate for now, but there are going to be loads of people feeling strained over this and we spend so much of our time trying to distance ourselves that we may forget this is only a brief period. But if tensions are running high and you’re all couped up for a long period you’d be surprised what a hug can fix, you don’t have sneeze all over them though to pass it on so use some judgement and be considerate.

Getting back to the point of all this, it’s a great time to consider giving up a few unhealthy habits, dusting off that exercise bike or treadmill you put away 2 weeks into the New Years Resolution and work off those snacks you’ve already depleted (from what it turns out was meant for week two rations… Am I right?) Let’s face it the gym is out of the question for now, and if you’re stuck inside so is actually cycling for your average person.
Take a look around the world at what’s happening right now, if you’ve not been glued to it already, it’s quite simply amazing to see how fast nature can recover from humans malpractice in our own environments, theirs too mind you!

There’s a story gone viral about the canals in a certain Venetian setting, created for self amusement in India, and I hate to drop the spoiler alerts but it’s fake news, debunked, there are no Dolphins there, and the swans live there anyway, the fish are now visible but the water’s by no means clear…

There’s exciting things on the horizon don’t forget, we all have things we wanted to do, but plans change, develop further and change again and we do it all the time year on year keeping the machine running, until you guessed it!

This will and already is the year for Electricity, cars bikes and even now scooters and the likes so if you’re scared of putting in too much effort (good if you’ve been told not to over exert yourself by a physician), fancy a little luxury or new technology there will be something to get you interested, if you’re in certain zones around the world there are grants and loans to convert you to e-bikes for both business and personal reasons, there are more benefits than than I could squeeze into a thesis or dissertation and there are enough people who’ve already done that…

If 2020 is anything it’s been long predicted to be then we are in for some change!

If you’ve been paying attention to the state of the planet none of this should surprise you, XR gave shot across the bow of the commercial world, and TESLA going from strength to strength, some things will change, we can now ride small electric scooters in certain parts of the UK and with cities around the world shutting down for the longest sustained periods in modern history urban people have seen pollution drop considerably in certain locales, if we can sustain this change alone the air quality will improve many peoples chances of surviving this and many other viruses to come (and believe me there will be more and more if we don’t)…

People are by and large it seems trying to adopt a work from home or more localised approach to solving this problem, and it’s going to have many benefits for some, for others I can safely assume you don’t get out for much in the way of exercise and your commute was never of the active sort to raise that heart rate at all, well some of the younger generations didn’t have your youthful pursuits of yesteryear and have already grown fat and in active with more years of screen time in their youth than some of these middle aged types have in their working lives, so you have to wonder where is your health heading?

With the youngest victim being only 21 in Spain and 45 in the UK for the Coronavirus and the larger at risk group being not too far ahead of that, there could be a lot of children growing up without parents and grandparents sooner than expected so this change of habits could really last a lifetime if we take the time of consideration before we start to spring from our nests, which could by a short stretch take us well into the summer as schools start closing for unknown periods and exams, and most reasons to leave the house get cancelled…

The lists of cancellations now stretching further and further ahead the events industry is being obliterated taking many sports out of play and I’m hoping at a long shot maybe that this might actually promote more active participations in activities linked to all these events you love to watch… It’s going to take a while to master it for sure but it’s the taking part that really counts in heart beats not points or prize cups but tangible improvements with less pollution could be easy to achieve with a bit more cycling in our lives.

The health benefits of getting out are hardly understated, by the time you’ve realised it’ll already be the summer, and then what are you going to do with all that sun and no cheap flights… This is a great activity for the family to enjoy, it could probably cost less to buy some bikes rather than pay for a summer holiday that might be spent at school anyway at this rate…

If you have a bike, it’ll probably work given a little wash and some air in the tyres, a drop of oil on the chain, etc etc if that sounds like to much trouble you could always get in touch with your local bike shop and see what they can do to help you or take a little time to learn how to fix it yourself.
Your local bike shop may even offer collections or delivery for your repairs at this time to help keep movement outside the house to a minimum, if they don’t please suggest it to them…

Fixing what you’ve got already can be a great way to get back into something with little outlay, a second hand bike with a bit spent on it can be upgraded and given a new lease of life. It’s won’t cost the earth, it’s an investment in it and in your future health too. Simple Services often range from a simple check over to full replacements of parts like the complete drive train and will make your bike feel like new.

Consider selling your old bike now, it’ll help someone in need, apart from the famous n+1 paradox your average person doesn’t really need or want to keep the old bike they’ve grown out of and probably won’t return to using it but someone else out there will still love it for years to come possibly getting a great deal more from it than you did.
If your confining yourself to the house, it might be a good time to start sorting out things like that pile covering everything in the garage, the shed you can’t get in, maybe with Spring here your garden’s overgrown the bike storage, it’s time for clean anyway whilst your going around disinfecting indoors (is anyone?) take the time to if you’re not, stop worrying about somebody else’s sh!t unless your sewers blocked with it that is (don’t flush those wipes & kitchen roll etc)…

If you’re thinking of getting a bike for any reason, now is a great time to accelerate that decision and reap some healthy & financial rewards as the weather improves or local transport closes down (I wonder which happens first, TFL is already reducing services) . They have more payoffs than I can be bothered to get into right now and if you’re not convinced already just even a little bit more not even for your kids sake (if they don’t have one, they’re gonna want one if they’re kept off school for the next 12 weeks and you’re stuck in a bed!)

Kids bikes are actually getting a whole load better, the more ergonomically designed ones cost a bit more but they pay off in miles of enjoyment you’d never have thought possible on a basic model you maybe grew up with.

Adults bikes are more amazing than ever the more you spend the more you get certainly applies to the quality of metals and workmanship available these days.
If you’re lucky enough to qualify for a discount like cycle to work or the cargo bikes loan in Scotland it’d be worth taking the option.

I’m going to write a post about what I think is reasonable to spend on a new bike, it will vary, there are scales of difference but for a guide your average MTB or Road Cyclist may ascribe to the following rule of x=20% of salary or +£100 p/year of age, x=n+1, but for commuting or simple exercise this isn’t necessarily a good formula for those on a pushed budget or space constraint.

So what on the way then? Here’s a few things to keep you excited for 2020 there’s enough gloom for most to survive with for a while…